R&D Group of EMSA GENERATOR conducts necessary works in terms of lack of high power diesel motor in the world & high costs and develops special projects that provide big benefits for its clients. With multi-generator synchronization systems, users avoid high costs and dependency on single generator. Our specialized personnel design and develop projects in accordance with the demands and requirements of client representatives.

WHAT IS PARALLEL OPERATION?

After synchronizing generators with different or equal power, their simultaneous feed of the load is called parallel operation.

Parallel operation allows more installed power by combining the generators’ power and instead of using generators of high power values, using multiple smaller generators is preferred due to its advantages.

WHAT IS LOAD SHARING?

Sharing the active or reactive load by the parallel operated generators in different or equal power based on their power level is called load sharing.

WHAT IS SOFT TRANSFER?

In soft transfer method, the load is transferred gradually between two sources in a defined period, at the end of the load transfer the circuit breaker of the source in no-load phase is tripped. The greatest advantage is not being affected by load transfer, their life cycle is extended due to the arc-free operation of the breaking elements that are tripped with no load.

COSTS ; The diesel engines being utilized in today’s 500 kVA - 550 kVA generators having the diesel engines that are utilized in construction machinery, trucks and 18-wheelers lead to an increase in the demand and in turn an increase in mass production at mentioned power levels and as a result lead to a decrease in engine costs. These costs are lower when compared with a single engine with the same power level. The engines with high power levels are manufactured based on request, has a high delivery period and is a high cost component.

Parallel systems, in addition to the advantages in first instalment costs, they offer benefits from a delivery period, operation, maintenance and spare parts costs standpoint.

RELIABILITY ; In parallel systems where one generator is out of service for any reason, the remaining generators continue to feed the emergency loads. However in a system with a single generator, this is not possible.

Another advantage of the parallel systems is: on sites with restricted or challenging physical conditions, moving, placing or mounting the generators are relatively easier.

The control units ensures that the diesel engines are operated at a constant speed, monitors the speed, oil pressure, temperature, cooling system elements constantly during operation and in an event of data outside the range, ensures that the engine is stopped as soon as possible, as safe as possible.

The control units constantly monitor the electrical energy generated by the turning of the alternator and in an event of out of range data for the energy generated, the voltage, the frequency, the current, power etc. ensures that the engine is stopped as soon as possible, as safe as possible (SMART 500, Trans AMF etc.).

The main element that ensures that the diesel engine rotates at a constant speed. It has mechanic or electronic types and in synchronous systems, the electronic types with remote control is utilized.

It is a main component with electronic nature that ensures that the electrical energy generated by the alternator is kept at a constant rate. In synchronous systems, models with remote control is used.

Today many brands have related synchronous control devices, as Emsa Jeneratör, the utilized major manufacturers and products are listed below. 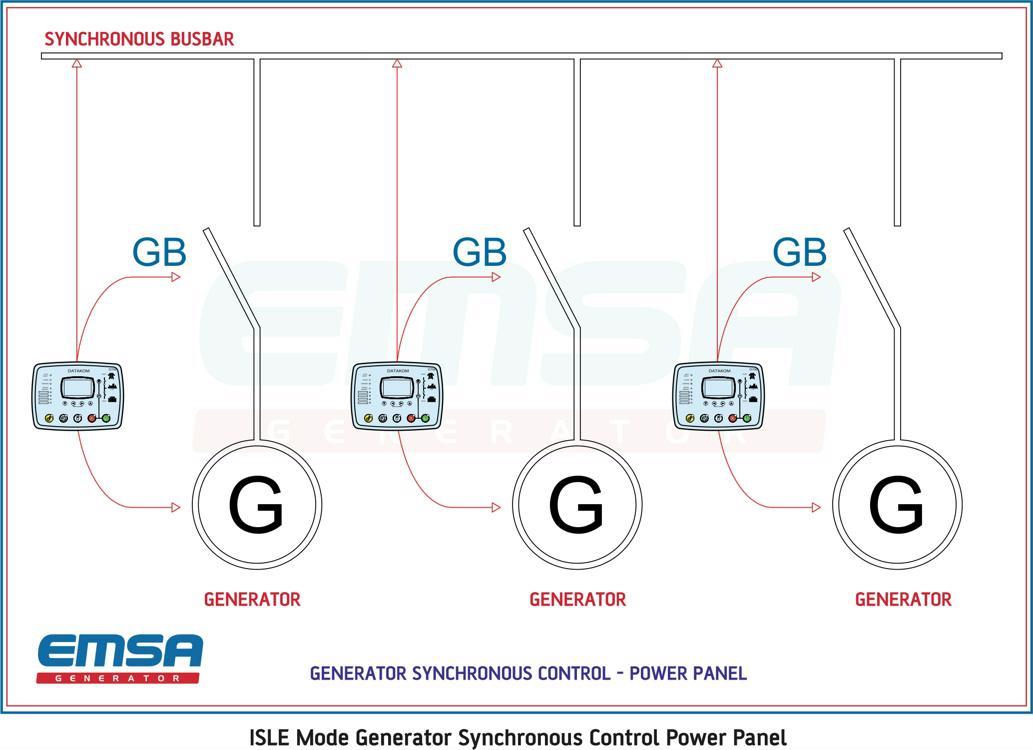 In Island mode operation, the system does not follow a mains source and does not automatically operate the generators. The system waits for the remote start signal that will be sent by the customer for operation and when the signal is received, the generators are powered on, connected to their busbars in sync and if any, feed the load. In the second operation alternative, the generators in the system are operated by the operator and ensures load feed.

It is preferred in open field or construction sites where a mains source is not present.

The option to operate the generators based on customer decision is preferred in scenarios where the units will be used with the current ATS systems that are established on the customer side.

In AMF mode operation the system follows a mains source and in an event where the mains energy may not be utilized, the generators are automatically operated and the loads are fed by the generators. 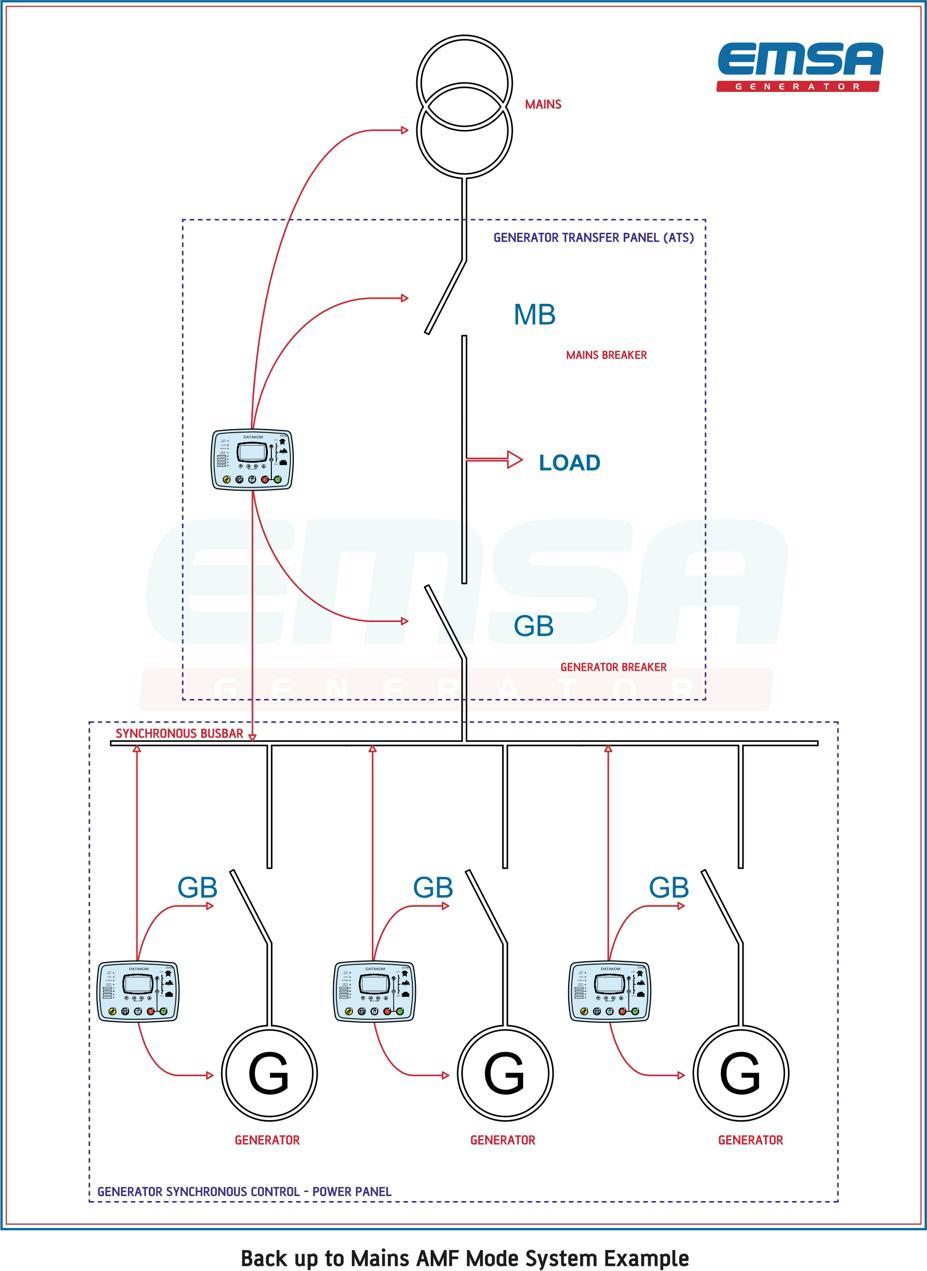 In AMF mode operation the system follows a mains source and in an event where the mains energy may not be utilized, the generators are automatically operated and the loads are fed by the generators.

The system trips the common output breaker of the generators as soon as the mains energy is at an operable level, the generators are separated from the load and the mains breaker is closed. The load is fed by mains energy. At the end of the cooling run, they are stopped until the next mains failure. 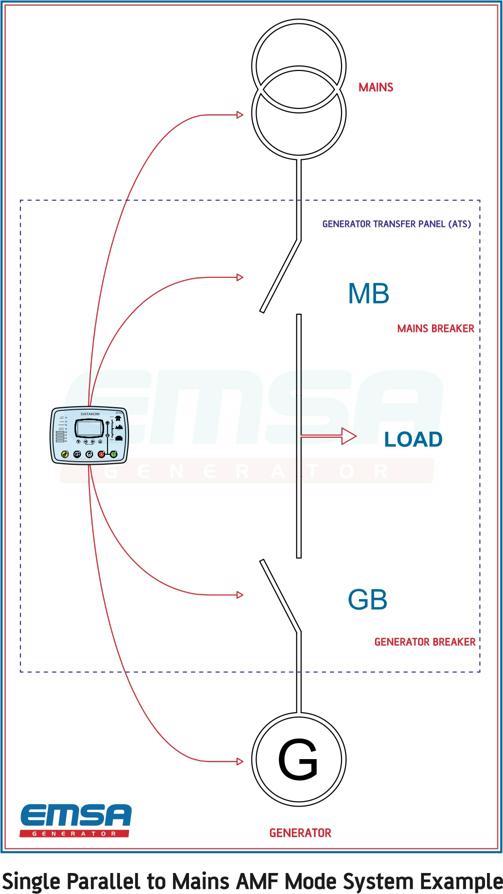 In special single line systems, there may be multiple mains transformer, multiple generators, multiple connectors between generators, coupling connections between loads and step up transformers. Generally for these systems the operation scenarios are determined based on the field and the load conditions.

In align with the operating scenario and customer demands, the project may include PLC, HMI (operator panel) and SCADA systems. 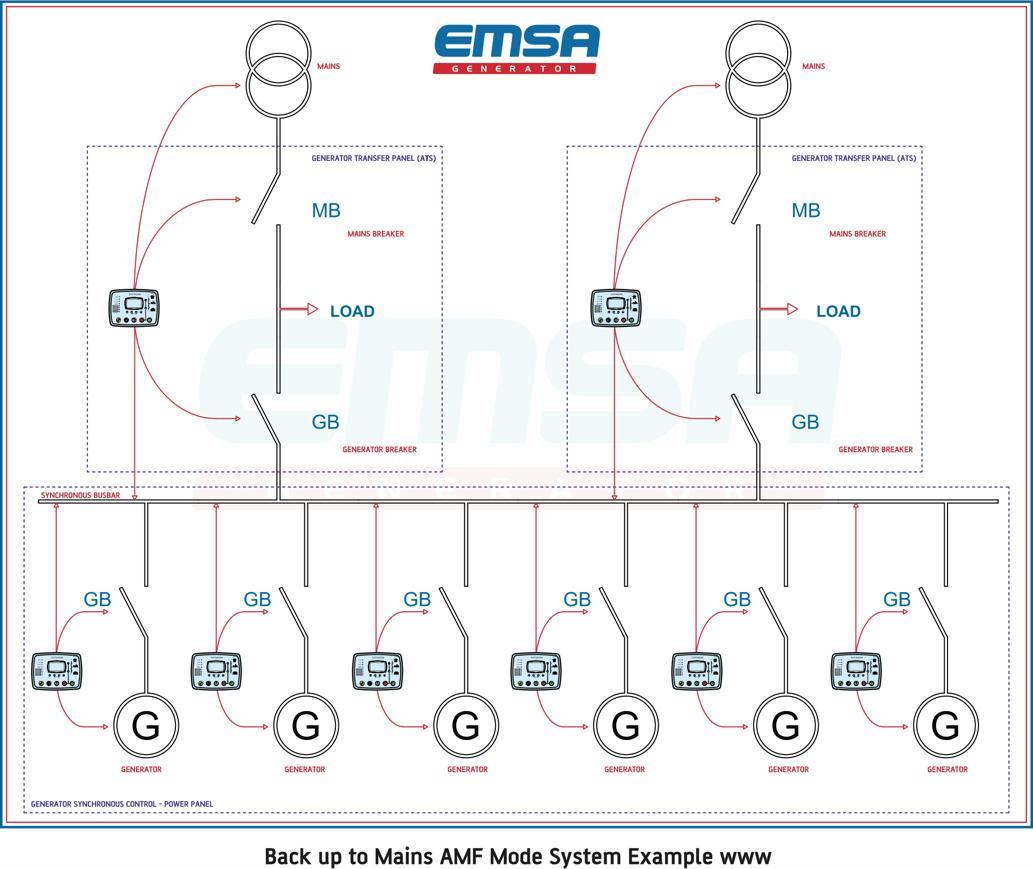